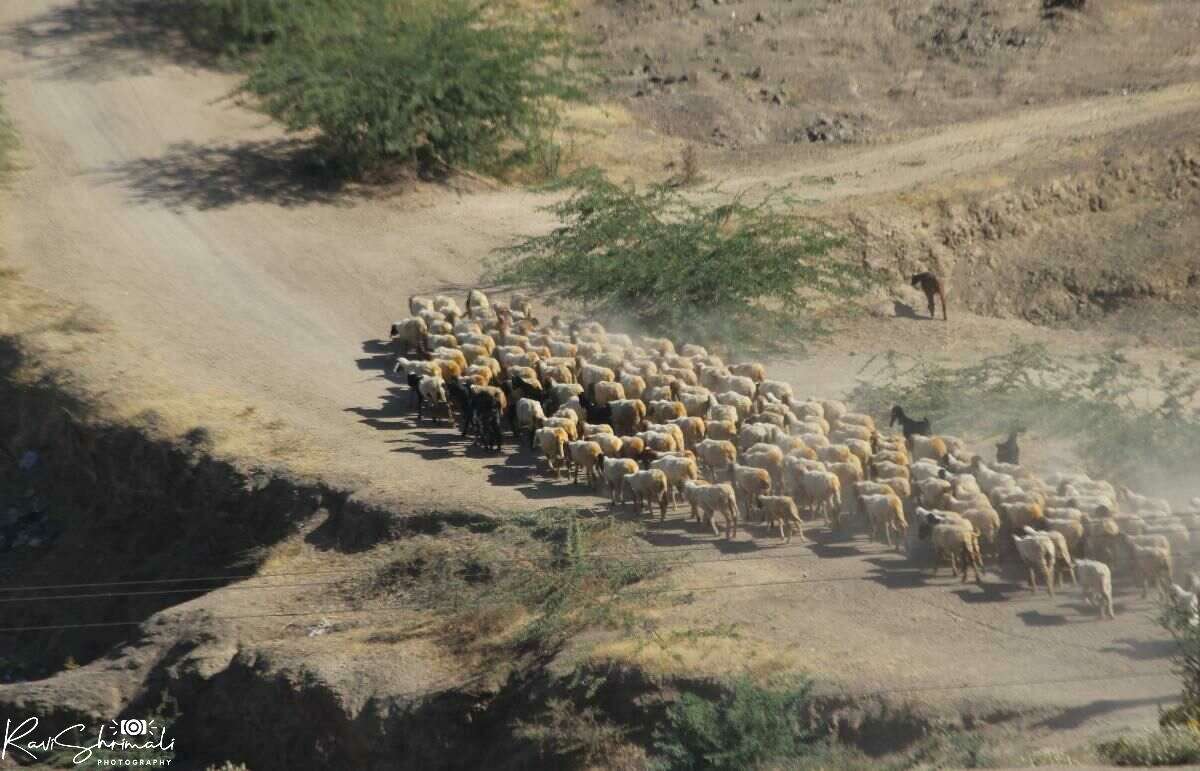 A flock of sheep walking on the road | Travel Photography

Most of us must have heard a very famous rhythm “baa baa black sheep“. Am I right? So, Today I am going to share surprising facts about sheep that you may not have heard about this cute-looking animal and also share a photo of a flock of sheep (group of sheep) that I have taken during the visit to Bhichri temple near Rajkot. Sheep are a strongly gregarious and social animal. Sometime or in someplace, you may have seen a herd of sheep walking together or eating grass or running across a vast land.

How many sheep breeds are there?
In the world, More than 200 different breeds of sheep in existence.

Are sheep the dumbest animals?
Many of us heard that sheep are stupid but That’s not true. In reality, they are really very intelligent, with memory and recognition skills. One study by Keith Kendrick in 2001, who found that sheep can remember at least 50 individual faces for more than 2 years which longer than many humans.

How soon do lambs stand up after born?
Within a few minutes, lambs can stand and walk with the flock almost immediately.

What a difference between a sheep’s eye and a human’s eye?
Sheep have rectangular pupils with excellent peripheral vision. They can visual fields of about 270 to 320 degrees whereas the human eye spans approximately 120 degrees of arc.

Can sheep self-medicate?
They are ruminants. A ruminant is a mammal that eats and digests plant-based food. The cattle, sheep, goats, buffalo, deer, giraffes, and camels are ruminants.

According to one article by Frederick D Provenza and Juan J Villalba, Ruminants do learn to consume particular feeds because they raise fitness, for example, sheep have been shown to self-medicate when they have consumed illness-inducing feeds (Villalba et al., 2006a; Howery et al., 2010).

How many sheep are in the world?
According to the Food and Agriculture Organization of the United Nations, By 2019, There are 1.23 billion sheep all over the world.

How many sheep are in India?
According to the Livestock population in India, In 2019, The total number of sheep in India is around 74.3 million.

Is sheep farming profitable?
Yes, For sheep farming, we can say it is the oldest domesticated animal for agricultural purposes, sheep are bred for wool, meat, and milk.

Hello Friends, Thank you for your visit. If you like, don’t forget to share with your circles. If you have any interesting facts about sheep, you can share them with me. I will add it to the post. Make sure, whatever you will share will be unique. So it will be helpful to others.

Want to see all the pictures, take a quick look at our Photo Gallery

20 responses to “Flock of Sheep Walking on Road”